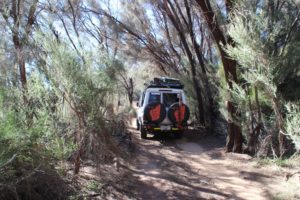 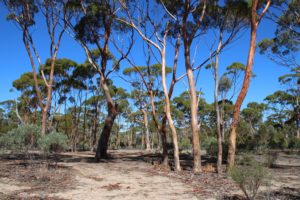 CLICK HERE TO EMAIL HOLLAND TRACK OFFICE DIRECTLY
It all began in August 1892. That is when Arthur Bailey and William Ford discovered gold at Fly Flat, which is now part of Coolgardie. Their discovery sparked a new gold rush to Western Australia. Eventually, Coolgardie had a population of 15,000 with another 10,000 living and working in the surrounding district.

Access to the goldfields was an arduous exercise in itself. Miners would travel to Albany, then take a train to Northam or York and then walk or ride a horse to get to Fly Flat. Business people in Broomehill realised that if they could create a short cut to the goldfields that it would be a win win situation for everybody. The businesses would increase their sales of items to the miners and the miners would get to the goldfields quicker than normal. After several failed attempts to create the short cut, the business people of Broomehill appointed an experienced bushman and sandalwood cutter, John Holland, to lead a small team of three men and 5 ponies to cut the track. They set off with 100 gallons of water. 2 months and 4 days later they arrived at Fly Flat. They had created over 500kms of track, wide enough for a small dray. The track was used by around 18,000 people over the next three years. It became redundant when the railway was eventually extended to Fly Flat in 1896.

Eventually, the southern half of the track was largely incorporated into the expanding wheat growing areas during the 1920s. For almost a century the northern half from east of Hyden to Coolgardie was all but abandoned and the area reverted back to pristine bushland, except for some intrusions by sandalwood cutters. Present day access is a tribute to Graeme Newbey – Broome Hill farmer – and Adrian Malloy a researcher who were determined to reopen the track. They led a group in November 1992 and with the aid of Graeme’s tractor succeeded in cutting the track from Wattle Rocks (about 22Km north of the Hyden Norseman Road) to Thursday Rock (about 70Km south of Coolgardie). In June 1993 Graeme led a 4wd Centenary Expedition along the newly opened track to mark the centenary of Holland’s historic journey.

The Toyota Land Cruiser Club of WA (TLCCWA) adopted the track in 1997 and has taken on the task of maintaining and, where appropriate, upgrading the Holland Track in conjunction with the Department of Parks and Wildlife (DPAW) and Track Care Western Australia. A trip along the track provides the opportunity for travellers to enjoy the pristine wilderness through which the track runs.
Early on, Max Barton, a member of the TLCCWA,  had agreement in principle from DPAW to extend the track north of Thursday Rock – where the current Newby track ends – to an alignment much closer to that of Holland’s track, thus preserving another significant part of the state’s history for recreational 4 wheel drivers to enjoy. To date, this has not been achieved. In such inhospitable country water is an issue. Hence the track links a series of huge granite outcrops where, after rain, water collects in pools in the rocks, an important resource to sustain the early travellers to the goldfields. Where water sheds off the rocks on average there are much higher moisture levels giving rise to unique and fragile mini eco systems much more abundant in flora and fauna and quite different from the surrounding countryside. Furthermore, as the profile of the rocks extend underground, the water at the base is prevented from escaping. Driving to the edge of rocks can be disastrous. Firstly the vehicle may break through the seemingly hard surface into soft wet subsoil and become hopelessly bogged. Secondly, and more importantly, the fragile mini eco system can suffer irreparable damage and the landscape scarred for decades. A strategy to preserve delicate environments in these vulnerable dtsareas is to erect fences or bollards and signs encouraging only pedestrian traffic to the base of the rock.
At one point the track ran over the toe of an active Malleefowl nest. The nest is still active in August 2017. Malleefowl were once common in the wheat-belt but destruction of their habitat and the introduction of feral animals( foxes & cats ) means they exist only in a few wilderness areas. They bury their eggs in a mound several metres in diameter and regularly add to or remove the nest material to control the temperature for incubation. Disturbing the nest or walking over it may destroy the eggs. The track has been diverted away from the nest; bollards and a sign have been installed to protect the mallee fowl and their offspring. In WA, the Malleefowl is currently listed as “Fauna that is rare or is likely to become extinct”. Ref:- National Malleefowl Recovery Team 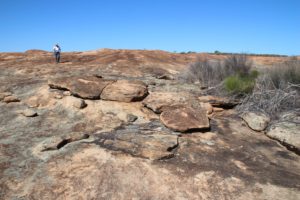 The Department of Parks and Wildlife (DPAW) has jurisdiction over the area through which the modern track runs. With support from DPAW and Track Care WA Inc, the Toyota Land Cruiser Club (TLCC) has volunteered to maintain and upgrade the track. To this end the TLCC has been involved in: The TLCC interest, as with all tracks, is to promote responsible use of the track and preserve the environment, to develop a win/win situation so that if we contribute towards looking after tracks they will remain open for the enjoyment of all 4WDrivers. Particular issues on the Holland Track are: A book – Explore the Holland Track and Cave Hill Woodlands – has been prepared Nick Underwood – editor of Western 4WDriver – and Ian Elliot a researcher of the Holland Track and may be obtained from 4WD accessory shops and newsagents. Permission is not required to use the Holland Track. The TLCC travels the track at least annually (usually more frequently), is happy to provide information on the track and appreciates (and receives) feedback from people using the track. May you enjoy travelling the pristine environment traversed by the Holland Track. If you do travel the track, please take some time when you get home to contact us regarding track conditions and other points of interest.

Life Cycle for Canteen - On Road